MATILDA is a research platform developed via the project “Stress-testing algorithms: generating new test instances to elicit insights”. The project has been funded by the Australian Research Council under the Australian Laureate Fellowship scheme awarded to Professor Kate Smith-Miles (2014-2019). The project aims to develop powerful new methodologies and tools to reveal the strengths and weaknesses of algorithms, and new test instance generation methods to support such analysis. The methodology has been applied to a wide variety of “algorithmic science” fields including: combinatorial optimisation, continuous black-box optimisation, machine learning, time series forecasting, software testing, and several other fields.

What is the significance of our research?

For many classes of problems there are numerous algorithms that have been developed. However, the No Free Lunch Theorems suggest that we should not expect one algorithm to outperform all others across all possible instances of the problem. Different algorithms employ different underlying mechanisms that may exploit certain properties of the data instance, failing to provide good solutions if the instance does not possess such properties that make the algorithm particularly well suited. It is typically an open question to know which algorithm will be the best for solving a given instance of the problem. Thus, if we want to select the most suitable algorithm for a given instance of a problem, it is crucial to understand the strengths and weaknesses of algorithms. New methodologies to support researchers are needed. The toolkit available in MATILDA not only supports insights in the quest for selecting the right algorithm for the right problem; it also helps avoid tedious trial-and-error testing or, even worse, a deployment disaster when an unreliable algorithm is chosen.

About our acronym: MATILDA

Besides being an acronym for the Melbourne Algorithm Test Instance Library with Data Analytics, MATILDA is also a symbolic name for our platform in two ways:

The MATILDA logo is a symbolic representation of the project in three ways. 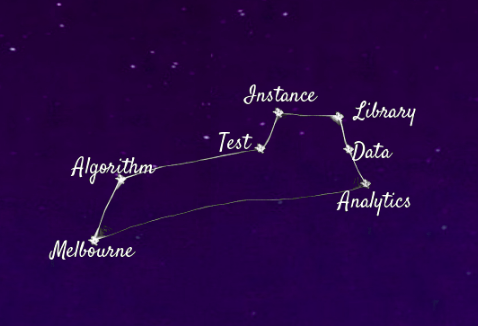